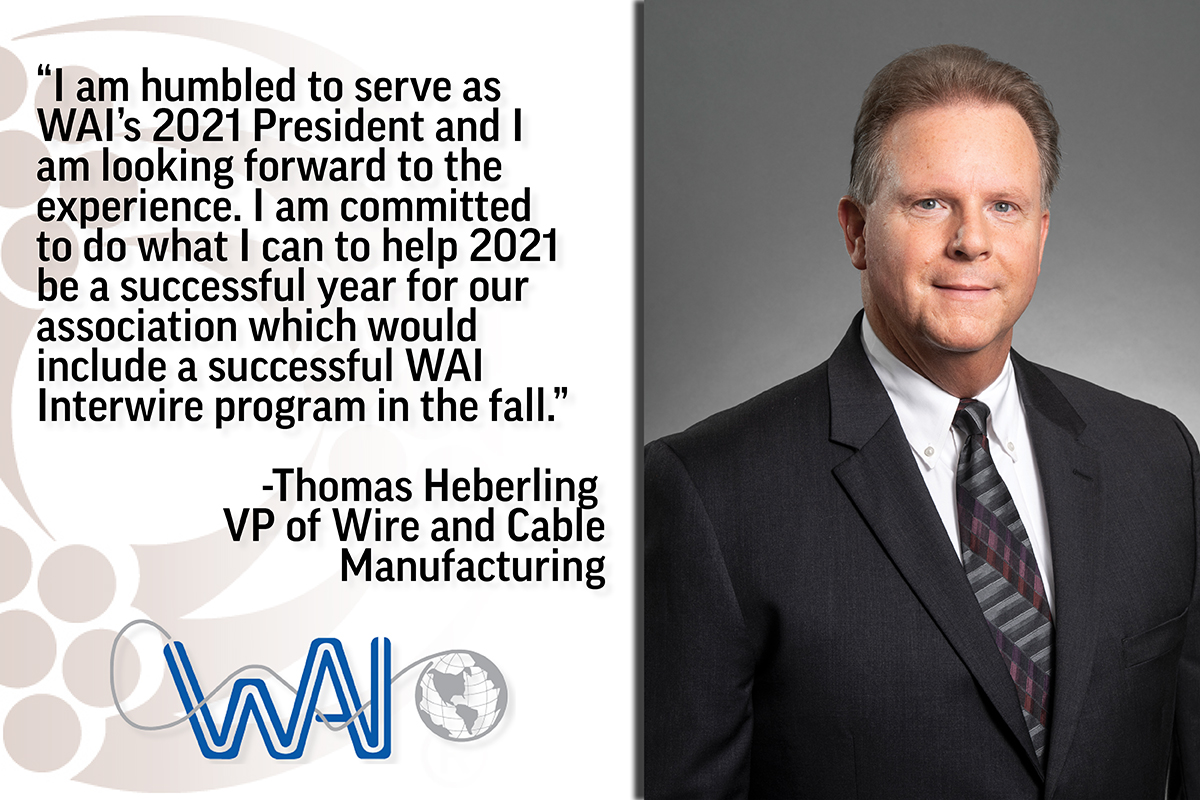 Thomas Heberling, Southwire vice president of wire and cable manufacturing, was recently announced as the new president for The Wire Association International for a one-year term that commenced on January 1, 2021.

“Tom will bring the same level of energy, intensity and outstanding leadership to the role of WAI President as he brings to Southwire each day,” said Rebecca Cranford, Southwire senior vice president of manufacturing. “Through the years, Tom has been highly engaged in the efforts of WAI because he’s committed to the mission of serving and advancing the wire and cable industry. He’s an excellent choice for this role.”

The below article is from The Wire Association International website.

Heberling To Lead The Wire Association International In 2021

Madison, Connecticut, USA – January 8, 2021 – The Wire Association International (WAI), Inc. announces the appointment of Thomas M. Heberling as president of the association for a one-year term that commenced on January 1, 2021. Heberling will serve as chairman of the Board of Directors and as the 68th president of the 91-year-old association, which is headquartered in Madison, Connecticut, USA.

Thomas Heberling is vice president of wire & cable manufacturing at Southwire Company, where he has worked for nearly 33 years.

A WAI member since 2010, he has served the association in many areas, including a crucial role as co-chair of its Member Relations Committee from 2012–2014 for which he was honored with WAI’s President’s Award 2017. In this role, he carried out a Board initiative that reshaped the educational products serving the industry, and served to further strengthen the value of membership in the Association.

Commenting on this new appointment, Heberling said, “I am humbled to serve as WAI’s 2021 President and I am looking forward to the experience. I am committed to do what I can to help 2021 be a successful year for our association which would include a successful WAI Interwire program in the fall.”

WAI, founded in 1930, is a not-for-profit association with nearly 1,800 individual members in 50 countries. The association serves the educational needs of the wire and cable manufacturing industry through a variety of products and services. WAI manages the Interwire Trade Exhibition and the WAI Operations Summit & Wire Expo and publishes the Wire Journal International and the Wire Journal International Reference Guide.